“To each expat, his homeland is his mother tongue that he continues to speak.”

These fine words gifted to us by Grigore Vieru and Prof Mircea Eliade, respectively, describe the fabric our lives of immigrants is sown in.

Once arrived on a foreign land, a two-fold state of integration triggers right away; acknowledging, learning and adopting the new culture, and simultaneously actively searching to find the ones of same cultural roots and background to congregate, with hopes of an easier transition and ascension in one’s new life.

The need to congregate is the thirst to find one’s own spiritual and emotional cocoon for nurturing, rejuvenating and relying in times of sorrow, and just as much for celebration, enjoyment and helping others, in times of happiness and growth.

As part Latin, Romanians everywhere displayed the same sense of association as any other ethnicity, and some more.  They bond with peers of same ethnicity, culture of faith, social context, economics, political and legal issues, thinking and social patterns, education and knowledge.

They all came from the four corners of the world, not always straight from the motherland, and upon arriving, just after the dust settled down, they needed to identify their status, they needed to find and redefine themselves again, pretty much following the same process they’ve went through as growing up and develop in their original cultural cocoon, starting right after birth.
Part of this relentless pursuit of our true selves is the very reason we are all here today, the very reason Viitorul Roman Society celebrates its 90th anniversary of its continuous, never-interrupted, rich life, which started in the afternoon of Sunday, 18 April, 1926.

And quite reasonable, this is what drove one fellow Romanian immigrant in US, around the turn of the 20th century to identify and initiate a dialog with other Romanian families in order to found no less than four different fraternal societies of members of Romanian heritage.

The last of four, he founded after he finally settled down in Southern California, at his home located a short trip east from Downtown Los Angeles, that Sunday afternoon.

He modeled this fraternal organization after the inspiration taken from the Romanian societies active back east and managed under the umbrella of the Union of Romanian American Societies, which, two years later, in 1928, became The Union and League of Romanian Societies of America, organization now defunct, following its merger with the Croatian Fraternal Union, in October 2001.

George Stoica Sr is the name of the man who put a group of 19 people together at his residence at 682 South McDonnell Street, in Los Angeles, who were the founding members (membri infiintatori) to put the basis of a Cultural and Aid Society (“o societate de ajutor si cultura”)

The following Sunday afternoon, April the 25th, they reconvened at same residence, to elect the first Board of Officers, including next to the President and Vice President, two recording secretaries, a financial secretary, two financial controllers and four controllers for the sick members – two for the men taken ill, and two for the sick ladies, if in need. The Board also provided for a Librarian and a Guardian.

Mr Stoica, who was obviously elected President, concluded the meeting that day with these words captured in the meeting’s minutes: “Long live, grow and flourish our Young Society which is the foundation of all well-meaning Romanians from Los Angeles and around!”

The last agenda item was the selection of a name for his Young Society.  There were three options submitted: “California”, “Pioneers” and “Viitorul Roman”.

“California” won by a majority of votes, but at the 6 June, 1926 meeting, the name issue is reactivated and the board decided to proceed with secret ballot voting between only two possible names: Viitorul Roman, or California, and somehow, they both won. At last, the new, adopted name was Societatea Romana de Ajutor si Cultura Viitorul Roman din Los Angeles, California – The Romanian Cultural and Aid Society Viitorul Roman of Los Angeles, California, and it’s been approved that this name will may never change forever!

In the meantime, at the board meeting of 9 May, it was decided to hire a consulting doctor for the society members and the rental of a PO Box, costing not more than $3 per three months (the minimal rental). But the most important action item sprung from that meeting was the decision to organize a banquet on the Pentecost Sunday (23rd May) at 3708 Brooklyn Avenue (by Boyle Heights of today), where 32 people showed up and had a good time.

The cover charge was set at 50 cents, for gentlemen, and free for the ladies, and food tickets were sold at $1 apiece. Those thirty-two feasted on four chickens, one slab of bacon, 6 heads of cheese, 8 heads of meat for sarmale and others, 15 boxes of soda pop, 2 boxes of beer and 5 gallons of ice cream.

Ever since its first years of existence, the Society participated to the foundation of the Romanian Chamber of The University of Pittsburgh and the erection of the Avram Iancu (Romanian revolutionary) monument in New York City.

During the Second World War, Viitorul Roman joined other Romanian societies in sending in substantial funds for the families of war victims; the Sibiu (Romania) Red Cross received money, medicines and clothes for those fighting in the battlefields.

Also during the Second World War, the Society effectively participated in a campaign to sell “War Bonds”, the Romanians from Los Angeles and around generously contributed to purchase a Jeep for the American Army in Romania.

Right after the war Society collected money and food and sent them to Romania, on several occasions, to help their brothers from Romania, victims of the Great Drought of 1946, and also help the families to get back on their feet after the damages of war.
In 1968, following the extensive floods in Romania, the Society sent over food, medicines, clothes and money to the families in the disaster areas. A similar effort, made jointly with the Holy Trinity Church and estimated at over $30,000, was made in 1977 after a 7.6 earthquake produced vast damages in Romania.

During the Cold War years, Viitorul Roman helped the political refugees held in Italy’s and Austria’s refugee camps. After 1989 financial help was delivered to families struck by the casualties of the revolution which toppled the communist regime. Visiting members in Romania’s orphanages and asylums brought over vitamins, syringes, diapers, medicines and money. One container, valued at $28,000, was sent in May, 1999, with the participation of the “Hearts For Romania” Foundation to five orphanages in Craiova.

Throughout the years Viitorul Roman awarded several scholarships to meritorious Romanian students in the Los Angeles area. In 1999, EDSA Corporation, a top leader in computer software, donated world class software of one million dollars list price to Viitorul Roman, which, in turn, distributed it to twelve universities in Romania. The award, which took place in Bucharest at the Romanian Cultural Foundation, was attended by members of the American Embassy, Congressmen, Academia, artists and mass-media. The society was the host of the National Convention of the Union and League of the Romanian Societies of America and of the second conference of the Romanian American Business Network in August-September 2000.

Ever since the year 1950 Viitorul Roman initiated The Day of Romanians, or Ziua Romanilor, which evolved into the Annual Gala and Banquet still offered each year by the Board of Officers and their volunteers.

In the past 40 years Viitorul Roman excelled in organizing cultural activities in the Los Angeles area: dozens of renowned artists from Romania, politicians, public figures and members of the Romanian royal family, including King Michael, Queen Anne, Princesses Irina and Sofia were present at the Society’s events.

King Michael and Queen Anne of Romania on the weekend of 24 January 1988 were guests of Viitorul Roman Society in Los Angeles.  That marked the very first official public appearance, from the day they left Romania under forced abdication.

King Michael’s speech concluded the Gala Banquet offered by our society with prophetic words of wisdom.  “Let’s spare no effort to capitalize on the opportunistic historical moment and, just like those in 1859 – to take the decisive step towards liberty and democracy. So help us God! Long live Romania!”

Well, just a few months after, as we all know, in 1989 his prophecy had been completed by the overturn of the communist regime and the repositioning of Romania back on the road of freedom and democracy.

Ten years ago, while celebrating the 80th anniversary at the Marriott Downtown Hotel, then-Romanian Ambassador Sorin Ducaru stated: “Viitorul Roman Society is the face of the Romanian Diaspora”.

I would now like to conclude this 90th anniversary address with the words of a great Romanian, who had been active both spiritually, with our Holy Trinity Church and socially, with our Viitorul Roman Society, Miron Butariu:

Miron Butariu:” Let’s lower our heads and, with clear souls, let’s pray to God that He will enlighten the minds of our future generations to continue and carry on the love and honesty between our Romanians, keeping the traditions, language and culture of our Romanian peoples in this corner of the world.” 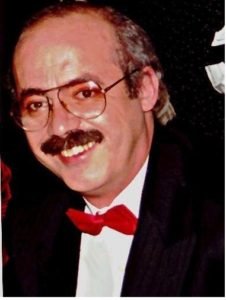