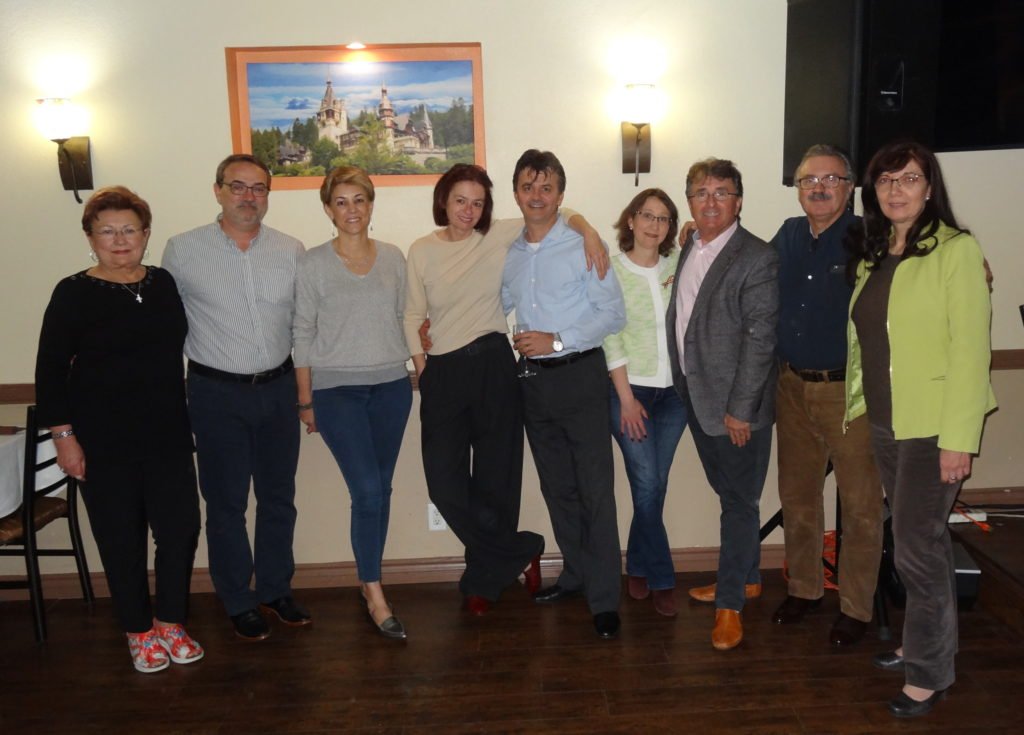 During 2017, Viitorul Roman Society (VRS) continued the fulfillment of its mission to preserve and promote the Romanian heritage and culture in Southern California through events of high professionalism and quality. 2017 was a year that made a positive impact to the society’s financials, bringing multitude of successful events to the community. Additionally, 2017 was a year of change with many NEW things: New board, new members, new relationships, new website and a new way of conducting our operations, all of these great transformations having brought a different and refreshing dynamic to the Society.

The series of events started on April 24, 2017 with the screening of the documentary “Chuck Norris vs. Communism”, where Mrs. Irina Margareta Nistor, the real-life protagonist of the film, was present for a lively discussion and Q&A. The event was organized prior to the opening of the South East European Film Festival (SEEFest) by our Society in collaboration with the Double4 studios and the SEEFest film festival and with the generous contribution of the Romanian Cultural Institute of New York. This event was an absolute success having drawn close to 150 people.

On April 22nd, VRS board members and members of the society participated in a fund-raising reception organized by Blue Heron Foundation, a foundation that celebrated 15 years of activity in bettering the lives of over 3,000 young people from Romania. Participants at this event had the absolute pleasure of listening to the singing of the renown Romanian mezzo-soprano Roxana Constantinescu. VRS showed its support by making a financial contribution.

Between April 25th and May 1st, 2017, the Society provided support to the SEEFest, a 30+ films event which took place in Los Angeles. Society members attended and helped organize the opening and closing galas as well as many of the week-long screenings. Romania was present with a few feature films, documentaries and short movies including “The Fixer”, movie directed by Adrian Sitaru staring  Adrian Titieni in leading role, and “The Trip we Took with Dad”, a film directed by Anca Miruna Lazarescu. This feature film was highly regarded, taking home a few awards including “Special Jury Prize for Best Ensemble Cast”, “Best Cinematography in a feature film”, “Best first feature” and “Audience Award – Feature”.

On July 30th, 2017, our Society in partnership with Emanuel Church & Temple Beth Emet showcased a special event presented by our own Cultural Director of VRS, rocket scientist, dr. Bogdan Marcu. The presentation, “Close Encounters of the Fate Kind”, was highly regarded and received with much emotions. The event concluded with a book signing session of Dr. Marcu’s first science spy thriller, “The Morhpem Project”, a book that is now available on Amazon.

On August 14th, 2017, Viitorul Roman Society in collaboration with Romanian Traditions of California Organization represented Romania in the 2017 LA Cultural Fair – Travel the world in a Day. Over 50 countries participated in this event, where the Romanian booth, organized and represented by our own Ionela Kloes and Cristian Calugarita, both former VRS Presidents, was highly regarded by displaying traditional costumes, flags and other traditional items. On the stage of the event, viewers could enjoy traditional Romanian songs showcased by our own Romanian friends, Dorina Manga and Viorica Onut.

On August 27th, 2017, Viitorul Roman Society organized “The Romania Language Day” in Los Angeles, as integral part of worldwide cultural celebration of the Romanian language and culture. At the event, Mr. Virgil Adumitoraie, the vice president of the Society gave a special presentation in memoriam of the regretted Romanian poet, writer and journalist Romulus Rusan. Following the presentation, the audience enjoyed the screening of the short movie “Departare”, directed and produced by our own Teodora Totoiu, the daughter of our board members Nino and Lili Totoiu. The event was concluded by an engaging contest of Romanian epigrams conducted by Cultural Director, Mr. Bogdan Marcu.

On October 21st, 2017, the Society hosted the Annual Ball at the Cima restaurant at the Pacific Palms Resort, City of Industry. The sold-out party was the pinnacle of another great year in the history of our Society and included two musical numbers. The musical program commenced with the talented Paris Chanson’s group, and then continued with the modern dance music performed by Hugo, at his second time appearance at the society’s Gala Ball.

The last event of the year, was a special screening of the wonderful film “D-Love”, directed and produced by the Romanian producer and actress, Elena Beuca. The conclusion of the screening was again conducted by Mr. Bogdan Marcu and followed by a live Q&A session with the producer and cast. As for the prior events of the year, we had the pleasure of having among us Mr. Cosmin Dumitrescu, the General Consul of Romania to Los Angeles as well as other members of Consulate.

All of the above stated events can now be viewed on our newly updated webpage (www.viitorulroman.com), which was completely redesigned during last year. Our new web master, Mr. Gabriel Mihailescu performed an excellent and magic transformation bringing this website to life and continuing to maintain it, posting in a timely fashion the many events our society was involved last year.

In conclusion, I would like to thank all of you for your invaluable contributions in keeping the organization vibrant and visible among the Romanian-American community here in Los Angeles and abroad. Thank you to all the members of the board –  The Vice-President and former President, Mr. Virgil Adumitroaie, the Secretary and also former President, Mrs. Ionela Kloes, the Treasurer, Mr. Ioan Totoiu, the Auditors, Mrs. Dana Moldovan and Mrs. Aneta Hariton, the member at Large, Mrs. Mara Chindris, and to the Officers, the Cultural Director, Mr. Bogdan Marcu, the Webmaster, Mr. Gabriel Mihailescu, and Principal Advisor to the Board, Mrs. Lili Totoiu-  for their sustained efforts in supporting of  all  activities of the society and to all the members, old and new, for their continued support.