Viitorul Roman Society held its traditional Annual Ball on Saturday, November 5th, 2016. The event was hosted at the spectacular Maya Hotel in Long Beach, where over 140 guests enjoyed beautiful views of the Pacific, view of the RMS Queen Mary and the Long Beach shore line!
The program was started by the President of our Society, Virgil Adumitroaie. He thanked everyone for coming and introduced the guests of honor. Among them were the Consul General of Romania in Los Angeles, Eugen Chivu and his wife, Mrs. Floarea Chivu, Consul Catalin Ghenea and his wife Mrs. Georgeta Ghenea. We were also honored to have among us artists, actors, writers, representatives from the fashion industry, professionals and past Presidents of the Society. The program continued with a heartfelt thank you to all members of the Executive Board for their hard work, especially Ionela Kloes – Auditor and Past President, Adrian Barbu – Vice President, Marian Sarbu – Treasurer, Susan and Vee Petrescu – Auditor and unofficial photographer, and Mara Chindris – Member at Large. I would be remiss not to mention Thea Adumitroaie’s monumental effort who, on her own was able to manage each guest’s check in, table seating, etc. Thank you, Thea! 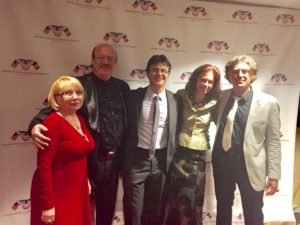 We also want to thank our sponsors : Diana Flowers, for the gorgeous flower arrangements, Cakes&Stuff , whose deserts were outstanding and Miorita USA, our media partner!
Our own Cultural Director, Aura Imbarus PhD, announced the launch of her newest endeavor, See Beyond Magazine, and introduced one of the young writers contributing to the periodical, Beatrice Barbat. The publication will promote various topics with emphasis on the young generation’s issues. We wish her all the best! 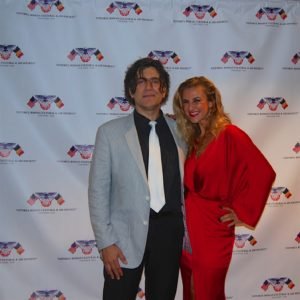 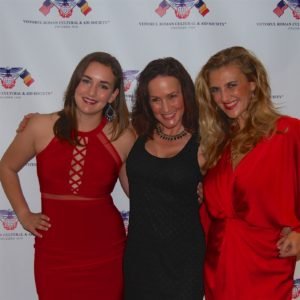 In the meantime, the guests enjoyed a delightful three course dinner, wine, followed by Romanian desert and coffee.

All the while, the night’s entertainment was ready… Hugo, One Man Band, delighted us with beautiful music from almost every corner of the world with his vast and rich repertoire. Of course the dancing started and it got more intense when our Romanian singer, George Rotaru, started his program with an array of old and new songs. Of course, few Romanian folk melodies had everyone on the dance floor!

During a very short intermission, we had a raffle drawing and the children lined up to help. The prizes included signed original art posters by Wanda Decca, an autographed book by writer Toma George Maiorescu, titled “Sinucigas plonjez intr-un real imposibil” (2015) and published by Palimpsest in 2015 and a painting by a Romanian child artist, Adriana Pandelica. Both Wanda Decca and Toma George Maiorescu were in attendance and we thank them, with gratitude and appreciation for their contribution! 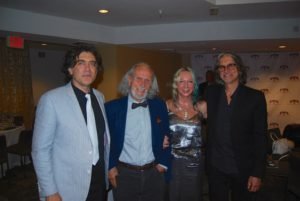 The dancing and good cheers continued until after midnight, while everyone enjoyed a clear and beautiful evening on the outside patio, surrounded by cozy heaters, confortable seating and warm fire places. It was truly MAGICAL!!!