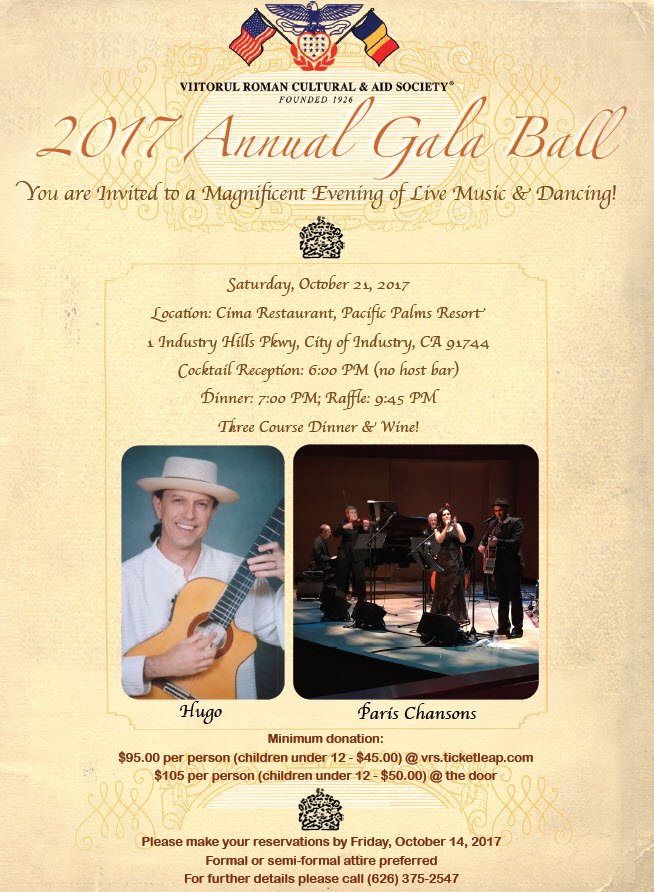 On October 21st of this year, on a wonderful autumn night, in one of the luxurious salons of the Pacific Palm Resort in the Greater Los Angeles Area, Viitorul Roman Society held its Annual Gala Ball. More than one hundred participants, friends, and special guests of the society attended. This year the Society had the pleasure and the honor to host several special quests: Ms. Sue Wong, the successful LA fashion designer, Mrs. Stella Cepoi, former President of the Society, arrived from Las Vegas for the gala, and Mrs. and Mr. Oana and Dinu Leonte, member and treasurer of the American Romanian Academy, arrived from San Francisco for the gala.

After the initial cocktail hour and excellent background live music  by the talented group Paris Chansons, the Gala was opened by the Society’s Secretary, Mrs. Ionela Kloes who welcomed the guests and provided a short review of the night’s schedule of fun and entertainment, after which she introduced Mr. Adrian Barbu, the President of the Society.

With his typical humor and special energy, Adrian briefly reviewed the history of the society, which approaches 100 years of existence, a long history during which the Gala Ball became a tradition.  Adrian presented to the audience the members of the society’s board, and then invited to the microphone the Romanian General Consul, Mr. Cosmin Dumitrescu.  Addressing the audience, Mr. Dumitrescu thanked the Romanian Community for keeping alive the Romanian culture and spirit, and acknowledged the important role played by the Society in strengthening the relationship between Romania and the United States of America.

After a delicious dinner menu, expertly chosen by the Society’s board under Ionela Kloes’ guidance, the party started on the dance floor.  The excellent music selection of this year’s ball generated a beautiful enthusiasm towards the dance floor for all the attendees.  The music program commenced with the Paris Chanson’s group, and then continued with the modern dance music performed by Hugo, at his second year appearance at the society’s Gala Ball.  Throughout the evening, the invitees enjoyed the surprise wins of a raffle contest with many fun prizes.

The good times lasted late into the night, when, at the end of the scheduled salon engagement, the participants, their friends and guests, regretfully had to head towards the LA freeways, with great anticipation for the next year’s Gala Ball.